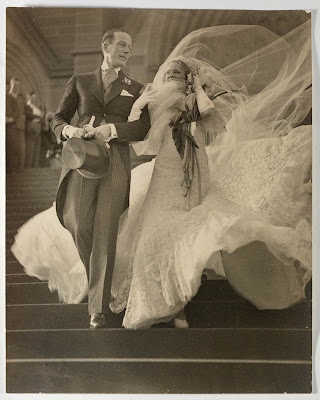 The kissing was already out of hand. Then they tripped. Stubbed toes and wobbly ankles they sat down hard on the sofa of the plush hotel room. Side by side and breathing hard they leaned back and rested a moment, groping for fingers to lace together. He scooted around to face her, she rolled her head to the side and they rested inches from each other.

He reached up and stroked some stray pieces of hair from her cheek, "Do you feel like this is supposed to be...I don't know, different?"

"Having sex with a married woman?"

He smiled, "A woman married to me, yeah."

"Yes, I think it's supposed to be different...somehow. I don't see how, though."

He wiggled his eyebrows suggestively and she rolled her eyes in response. Their heads lolled back again and they sighed.

"I'm kinda nervous." he whispered, not looking at her.

She smiled and looked at him. This was the only man she would make love to for the rest of her life. When you put it that way she got nervous, too. She lifted her full skirt and rolled over to straddle him, "How about you just kiss me some more?"

"I think I can handle that."

She leaned into him, cradling his face in her hands. he kissed her soft lips, trailed down to her clavicle then back up to lick those lips again. He wanted to grab her head and press it hard to him but tortured himself, fingers gripping and releasing her tulle-clad hips convulsively.

When they broke this time she swiped his bottom lip with her thumb and sat back to smile at her husband, "I'm getting crinoline ass."

"The crinoline is all scratchy and it's imprinting itself on my ass."

"Oh jeez. Only if you help me out of this dress."

He helped her up to standing and she pulled him up to join her. He held her face, kissed her strongly then slid his arms behind her to negotiate the long zipper down the back of her gown. Ever since he was a kid the sound of a dress being unzipped made him hard. Like unwrapping a present but better than any Christmas he'd ever had.

Resting one hand on her shoulder he traced up her newly exposed spine with the other to see her shiver and feel her stand tall. Then he turned her within the circle of his arms. With both hands on her shoulders he took a deep breath before sliding the sleeveless bodice off her arms. The whisper of the fabric covered his ragged sigh. Using a hand on her hip to steady her he held the dress so she could step carefully out of the circle of the skirt and back toward him. Holding her to him with a palm to her stomach he leaned forward to toss the dress over the back of the sofa.

That's when he noticed her lingerie. It was some sort of tight, satiny corset affair. It pushed her handfuls of breasts up but didn't cover them and stopped just below her navel. As his hands slid up toward her pinkening nipples she stopped him.

It took her a few moments to master the mechanism of his cuff link.  When she got the first one off she dropped it into his open hand. When she turned to the other cuff he cupped the cool metal between his palm and her nipple. She jumped back against him, gasping and giggling. His deep, satsified chuckle in her ear sounded warm and fun, free and easy, just the way she imagined life to be married to him.

After she managed the second cuff link he leaned aside to drop them safely into the candy bowl on the end table. Meanwhile she turned again to face him, beginning immediately to unbutton his crisp, white shirt. Not wasting any time  she let him shed the shirt while she unfastened his trousers. She ran her fingers through his hair as he bent to step out of them then knelt at her feet. The garters held no challenged for him. His hands felt heavenly, a light, teasing touch to roll the stockings down to her ankles. His touch was loving as he stroked them off the tips of her toes. Those hands slid smoothly back up her legs to her hips and he looked into her eyes as his fingers hooked the sides of her panties. She couldn't help but smile shyly. This was new and different in some inexplicable way just as they'd suspected.

After she'd stepped out of the pale blue undergarments he sat back and looked at her a moment then led her into the bedroom and made love to her like it was the very first time.
Posted by Kizz at 7:27 AM