My, What Big [blank] You Have, Grandma 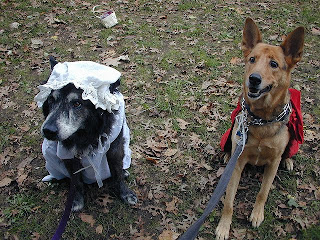 I have a new dog.

Pre-owned, new to me, but plenty new enough, frankly. He appeared by chance last Wednesday and all my time since then has been spent figuring him out. He's pretty high strung and highly directed, I fear he has a stronger work ethic than I do, but he's also highly trainable. I'm crating him for the moment since he's un-neutered and has a tendency to mark when things get uncertain. He learned pretty quickly, though, that being in the crate was a good thing. He calms down immediately when I put him in the crate and then lie down on the bed. Today, while taking a nap, I realized I should make my problem my solution.

No, I'm not going to talk about bestiality.

Honestly, that's one thing I'm not sure I could investigate too closely. I love my animals too much. Then again, if someone said, "I've got two tickets to the Donkey Show, I think you should come." how could I say no?

I'm here to ask how your pets react to the having of the sex in your house. My cats are afraid of everyone so they've never come out and bothered me. My previous dog was pretty chill. If she was told to go sleep on the floor she'd go, no questions asked. I've had cats who liked to sleep on my back and I know plenty of dogs who take any sign of movement as an invitation to interact. I have a friend who tells a truly terribly story of taking an after-sex shower in a woman's apartment and when he stepped out her cat was waiting for him. They stood, looking at each other for a moment, until the cat decided to take a swing at the cat toys he was sporting. He's hated cats ever since.

Really the worst story I've got to tell on myself is having to rewash a rabbit vibe because the cat was licking the lube off it. I felt dirty about it but the cat didn't care.

What about you? Ever had a cold nose to the buttock when you least required it?
Posted by Kizz at 4:32 AM