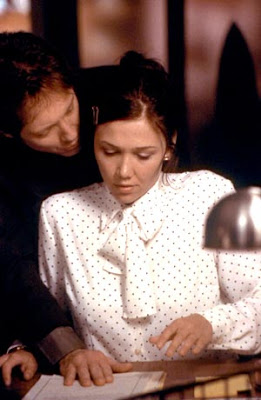 When people ask for my top five movies they don't, I think, expect me to say, "Secretary." It happens every so often that I read or watch something that just makes perfect sense to me on a nearly physical level. The first time someone asked me what I thought of the film I said, "It's a fairy tale written just for me." Which I suppose could be taken a number of ways. When the credits rolled it seemed that, of all the romances I'd seen on film this one felt the truest.

Quick synopsis: Maggie Gyllenhaal plays Lee Holloway, a young woman recently released from an in-patient mental health program. While trying to reintegrate into her old life and perhaps even improve on it she gets herself a job. That job is with James Spader's character, Mr. Grey, an exacting local lawyer. Over time they discover they have something in common.

OK, from here on out I can't promise there won't be spoilers.

Lee isn't a gorgeous woman objectively. She becomes shy and retiring when trying to hide her need to submit. When she's able to let that shine through she can do anything, ask for anything, be anything she wants to be. It's not Mr. Grey who transforms her into someone beautiful and intelligent, it's finally insisting on showing her true self that does. No one else could possibly do that for her. The writers and director never once stray into a construct that suggests women are weak or easily manipulated. 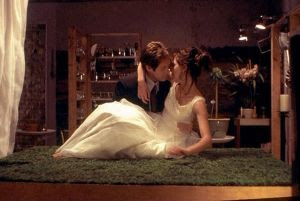 There are a lot of acts Mr. Grey and Lee perform that don't turn me on and yet the depiction of them is thoroughly panty-soaking. There is a sexual tension in Spader's every move that, even when his character feels shamed, doesn't bring the same feeling down on the audience.

What's your favorite mainstream movie with sexual content?
Posted by Kizz at 7:28 PM