Revisiting: Once Bitten, Not Shy

As many of you know, the inspiration for our Monday conversations comes from a column I wrote at The Women's Colony. I plan to reprint all those posts over time. This post seemed better suited for The Resource Room than our conversations. I haven't edited out the bits that are Women's Colony-specific but there's no need to worry about those, I just like having the original pieces preserved completely on the internet. Thanks in advance for your understanding. 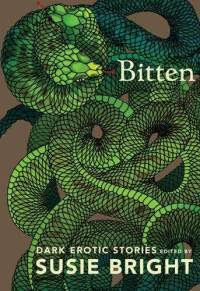 Full disclosure, I got this book brand spanking (hee hee) new thanks to a discount from Bright herself. That was in response to a call she put out to get positive Amazon reviews soon after the book's release date to help sales. I should publicly apologize here for not getting that done. I purchased the book immediately and even began reading it but set it down for some reason (possibly related to my dog's death but not entirely, I'm afraid) and have only just recently picked it back up and finished it. I promise to write my review now and get it posted to Amazon ASAP.

I also want to assure you that no part of this review is written to assuage any guilt I might have over my tardiness. I have been a fan of Bright and her anthologies for more than a decade and wouldn't be disrespectful enough not to be honest here. The first piece of erotic literature I came across was Anais Nin's Delta of Venus (is this everyone's first?) and quickly on its heels Story of O (I was stage managing a somewhat avant garde version of Beauty & the Beast, the library was topical). They were good, a stark contrast to the furtively perused copies of Penthouse I'd discovered as a teen, but they are both of a certain period. While they are both explicit they still pull some kind of filmy curtain over the whole torrid affair.

Sometime after that I was fortunate enough to discover The Best American Erotica series. Here were stories where the curtain was shredded on the ground being used to mop up after orgies of really juicy words. These short stories left the questionable grammar, foolish bodily proportions and laughable coincidences of a book of Penthouse letters in the dust. I started a collection and, while it isn't quite complete, it is much beloved and as well-used as many of the characters therein. Financial woes, I'm told, brought the publishing of that series to an end. It didn't bring Susie Bright to an end, though. I read her web site and I sampled some of her other work and I like a lot of it but none so much as this new collection.

First off, just from a book lover's perspective this is a piece of art. Technically a paperback the cover has delicious weight and structure. The edges of the pages are black to hold the integrity of the cover art which makes them seem somehow more valuable. I'm petrified of snakes and yet, the slightly raised cover illustration turns my mind more to bite than flight. The publisher, Chronicle Books, clearly cares about the whole experience of bringing this volume into your bed.

Probably, though, you're more interested in the content. I'll tell you I felt a little wrong reading it on the subway. Delightfully wrong. The title isn't vulgar (like so many of mine) and the cover shows nothing remotely suggestive (unless you're a fan of Freud) so there was no reason anyone would know of the lifted skirts and swiftly unbuckled belts within, which was, frankly, a little disappointing. This was, perhaps, the only time I kind of wanted someone to read over my shoulder. The theme Bright worked with was gothic erotica so there are elements of the occult and the fantastic in each story but, to me, they all seemed deeply rooted in ordinary reality. This, I think, made every story all the more thrilling since they could be happening all around me.

There are 15 stories in this little gem. I was ready to write a glowing review before I even finished the first one, The Devil's Invisible Scissors by Sera Gamble. All the action takes place in a bar, any bar, could be the bar my bus was skimming past right then and the sex isn't front loaded. Gamble makes you wait for it. She wants to be sure you really want it before she gives in. I did. I really, really did. I wanted it so much that I'd like to thank her and Bright and all the authors by telling you about each and every tale but we just don't have time for that. I'll hit a couple of highlights and simply urge you at every turn to acquire your own copy at your earliest convenience or perhaps just slightly before that.

I've got tell you that I can't properly recommend my absolute favorite story in the collection, The Legacy by Donna George Storey, here. I simply don't have the words. Storey's heroine becomes intrigued when her boyfriend tells a group of friends about a photo book his uncle bequeathed to him. The book contained many models but all from one quite...narrow view, if you will. Her fascination with this knowledge spurs her to action and that's all I can say about that. If Storey were writing here, if Storey had used that word around which there was all that uproar, there would have been no objections, everyone would simply have begged her for more. More, Ms. Storey, please ma'am, more.

My sharper side has asked to read and re-read Cate Robertson's Half Crown Doxy. Maybe it was because thoughts of crime and punishment were at the forefront of my mind while I read. Maybe it's the appealing heroine. Probably, though, it's the way Robertson made me squirm in my seat and read through squinted eyes but read on nonetheless. She skates along the line where more cruelty would be too much, would dampen the buzz I had going by that point in the book, she threatens at every turn to step over it and yet, at least for my taste, never quite does.

On that note, I've only told you about three selections from this group. If the Colony were a physical place we could have a book club meeting (with a clear, definitive warning posted on the closed door to our sound proof meeting room) about it. I'd like nothing more than to go over each story individually with you. It is, for my money, Bright's best collection. If I have any quibble it's that the pieces are laid out in such a way that the ending is ever so slightly disappointing. The Devil's Invisible Scissors is such a strong opener that tapering off with Get Thee Behind Me, Satan, a story that is heavier on harsh emotion than on sex of any kind, was something of a letdown for me. Then again, if I hadn't been just a little bit let down I wouldn't have jumped directly back in to re-read my favorites.

Perhaps you know someone who's wondering what to get you for the holidays. Perhaps that person wants to make you very happy in a variety of ways. Perhaps that person is you. Whoever it is I hope you find a copy of Bitten under the holiday icon of your choice in the coming weeks. I feel certain it will make you very merry indeed.
Posted by Kizz at 6:29 AM