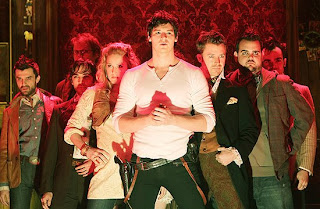 You know what I think is sexy? Live theatre.

Bloody Bloody Andrew Jackson is a musical based on the life and presidency of, you may have guessed, Andrew Jackson. Dude was nuts. OK, well, passionate. He was a flip flopper! He was an idealist! He was a brute! He was a romantic! Honestly, I have to do some more research before I can even begin to guess but he certainly led a rich and varied life both in and out of politics. Alex Timbers and Michael Friedman have styled Jackson as a bit of a rock star. They have translated his charisma and populist approach into a character equal parts John Wayne and John Mayer. Benjamin Walker dons some tight jeans, a pristine Henley and a utility belt/holster that would make Batman proud to breathe smoking hot life into our 7th president. It's heart racing, panty dampening goodness.

If sex is at least 50% in your mind then BBAJ has that all wrapped up with a leather bow as well. Jackson had complicated views on immigration, Native Americans, war, governmental size, congressional power and work-life balance. Responsible for the rehoming and outright killing of nearly the entire Native North American population he cherished a son rescued from the massacres he engineered. While he was a man of bold action he sure wasn't afraid to contradict himself. As we stand in highly charged political times now it's tempting to watch the play with an ear out for which current party is being lambasted by the production and the answer is both. Which is, I suspect, as it should be.

The ensemble for this production is diverse and brutally talented and they are leaving nothing in the tank for later. Each character (many actors play a few in the course of the show) is fully formed and beautifully nuanced. I've had Emily Young's rendition of Ten Little Indians running rampant through my head since I left the theatre on Sunday. Bryce Pinkham's portrayal of both the weasel-wearing, creeptastic Henry Clay (second from left below) and the hypocritically smoldering Black Fox have been fodder for many a naughty day dream for the past few days as well. And if laughter is your trigger you should bring something to bite down on before Jeff Hiller (second from right below) takes the stage. Every moment of broad comedy was so funny I thought Misti was going to need a change of underthings before we headed home. 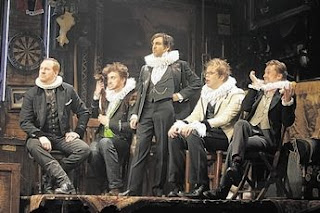 There were too many empty seats in the house for my liking on Sunday night. People are missing out. So today I recommend that, if you are anywhere near Broadway, you go see this intelligent hootenanny of a musical as soon as humanly possible. If you are not close enough to do that please keep your fingers crossed that it will have a life on the touring circuit. As politically and sexually charged a piece as it is I don't know that a tour is in its stars but if Urinetown! (The Musical) can tour then anything can happen. Keep your eyes peeled for these actors and this show, I truly think you'll love it.

Tight jeans are sexy. Smoky eyes are sexy. Thigh tattoos and cowboy boots are sexy. Mostly, though, talent is sexy and Bloody Bloody Andrew Jackson is shot through with that.
Posted by Kizz at 1:22 PM