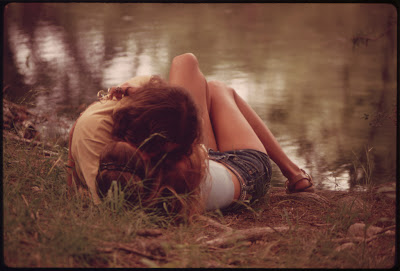 It would have been so easy. Normally hearing her laugh, making her feel better wouldn't have been a problem. We are friends, after all, and she is hurting.

Her timing, our timing, however, is atrocious.

She is in the throes of a huge breakup. The guy she'd stumbled across right after we met has...you know, it doesn't even matter why or how. They’re breaking up and she isn't happy about it and a friend would help, wouldn't he? She doesn't want a joke or a night at the movies. I know her well enough to read the signs.

I know it would have been so easy last night to turn my head when she hugged me goodbye. I could have kissed her right up against the back of the front door. It would have felt delicious to press my whole body against her, feel her breasts, even through that oddly fuzzy little coat she wore. She would have smiled, with her eyes closed, and hummed a little, way back in her throat.

Or I could have simply moved in a little closer as she stood at the sink last Sunday afternoon and I reached into a cupboard above her to grab a glass. I could have brushed the backs of my fingers over her cheek, run my palm down her side, pressed my thumb against the center seam of her jeans until she leaned back against me. She’d have hummed then, too.

I admit it, I’m a little obsessed with the humming. On New Year’s Eve a few years ago at midnight she threw her arms around my neck and kissed me soundly on the cheek. Then she turned to him and and leaned in, very slowly, for a kiss. When their lips met she did that little humming thing. It made him smile. It made my chest tight. Then it made me think about her humming around my cock.

I’m a nice guy but I’m not dead. I think about that stuff.

I know her pretty well. I honestly think she’d like that.

She’s going through this break up, though. It wouldn’t be right to press her at this point, no matter how much she thinks it would relieve suffering.

Or maybe it would. Sometimes a little sexy naked time is exactly what’s called for when your heart is breaking. So perhaps, just perhaps, my reluctance has nothing to do with protecting her and her fragile emotional shell. I’m not saying it for certain but it’s possible, quite possible, that I’m protecting myself.

As much as I picture her naked and writhing across my yard sale super bargain sheets humming her desire into my collar bone I picture her plunking down across the coffee table from me with her laptop. Not the sad, defeated way she does now (though I fear that might come later, once she’s gotten to know me like she knows him) but happily, there because she belongs there, there because she wants to be there. With me.

Tonight the moping recovery girl will surely “just swing by” for an hour or so of companionable silence and TV with a beer and chips chaser. When she leans her head against my shoulder, sighs from the depths of her lungs and smooths her hand over mine I could kiss her fingers, suck one in my mouth maybe, lay her back on my lumpy second hand sofa and lick a smile out of her. With a little concentration and luck I bet I could even get her to giggle. But I’m damnably self-aware enough to know I wouldn’t want to do that just the once.

I know her, sure, but it turns out I don’t know her well enough to know if, for her, once would be enough.
Posted by Kizz at 11:36 AM